I've done a few of these "anniversary" pieces, and they're always a lot of work, but also a lot of fun. I wanted the current version of the Joker from the comics to be dominant, because I wanted to honor where the character is and not just where he's been. Hopefully after he creeps you out, you notice the Jokers on the playing cards. Cesar Romero (and moustache), Jack Nicholson, Heath Ledger, two animated Jokers, his first appearance from the comics, and several other incarnations are all represented. This piece was a little rushed, but I'm pretty happy with it. 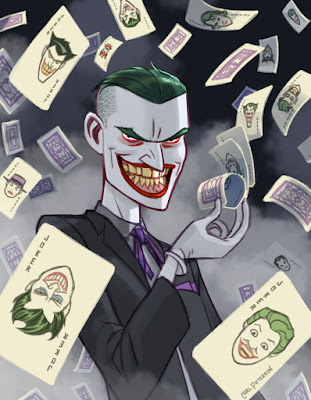 Posted by Carl Peterson at 3:51 PM